Today, this emblematic building spans through 22,000 square meters where we can find ten different spaces for theater, dance, circus, classical and popular music, visual arts, popular art and conferences. There are also five squares and a library, BiblioGAM, specialized in scenic and visual arts, working with an open shelves and rooms specially designed for study and reading. It also counts with a recording studio and a studio for music rehearsals. 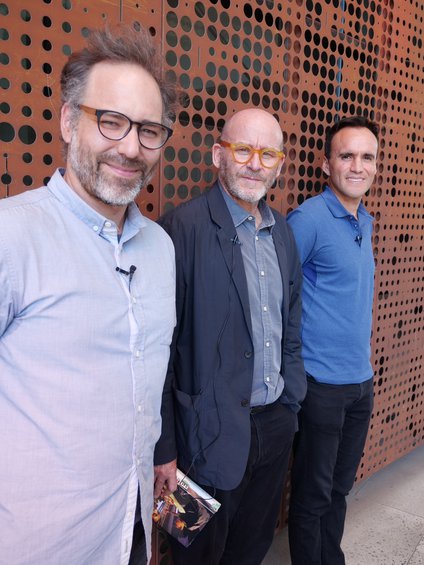 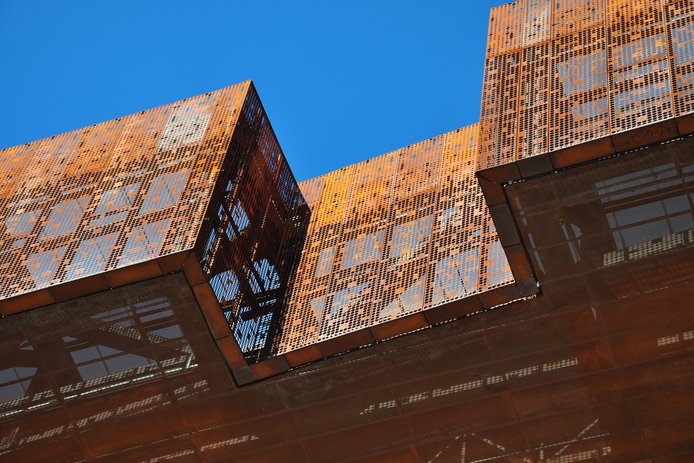 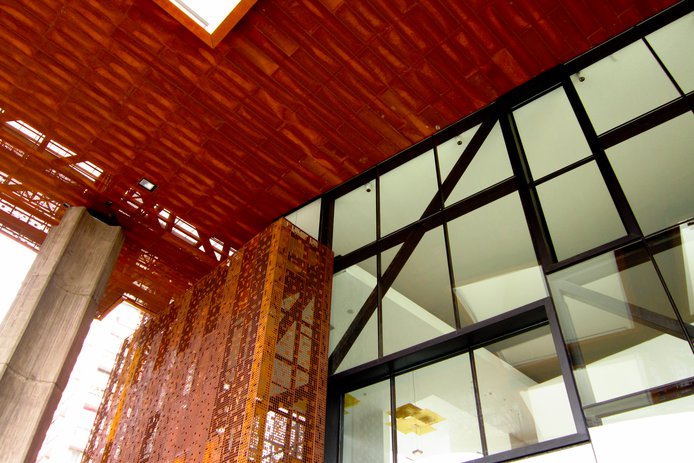 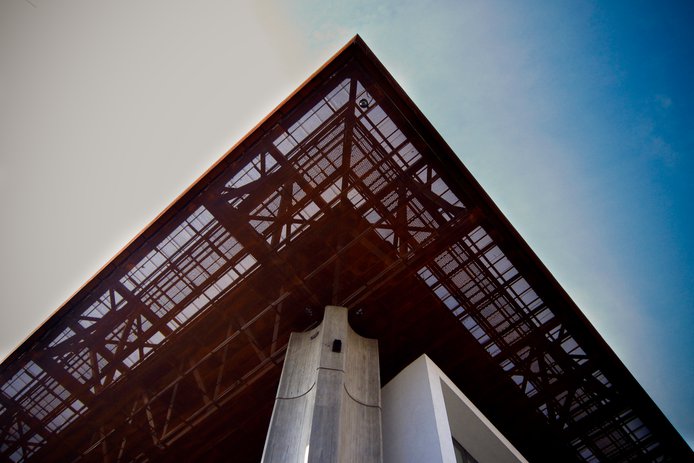 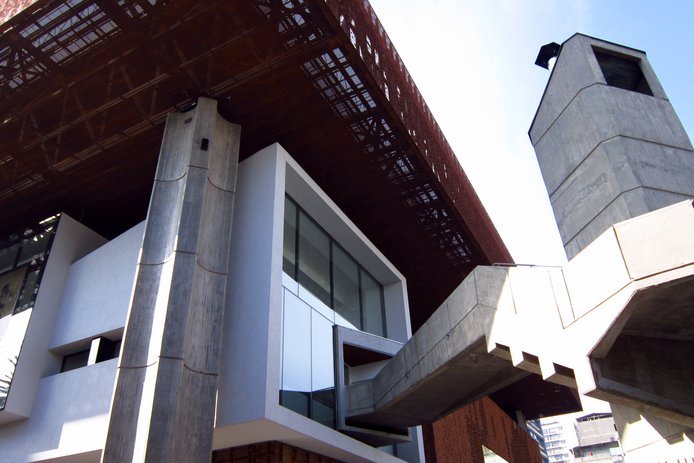 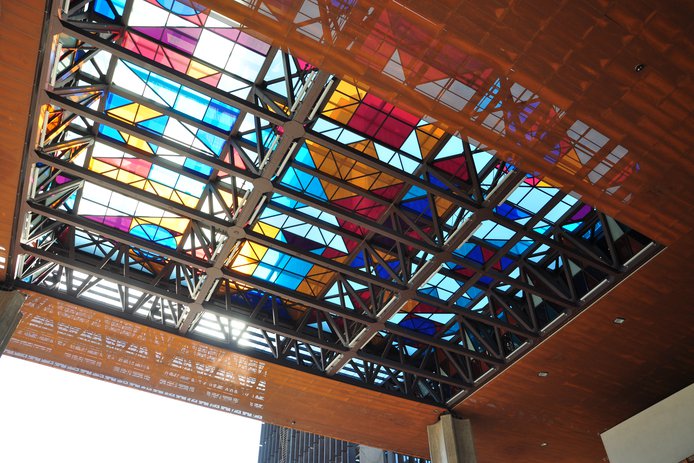 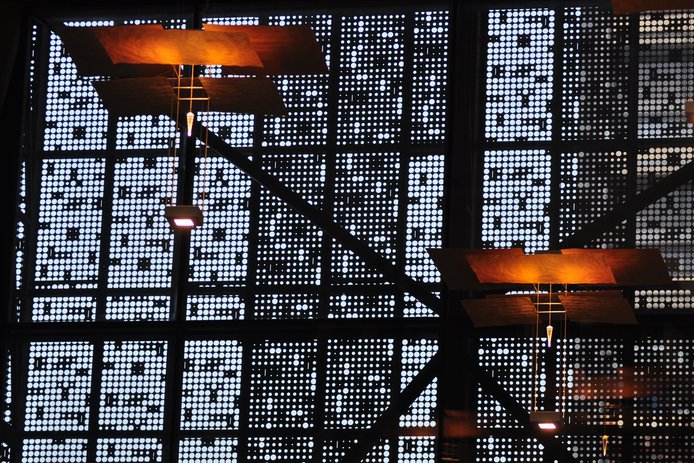 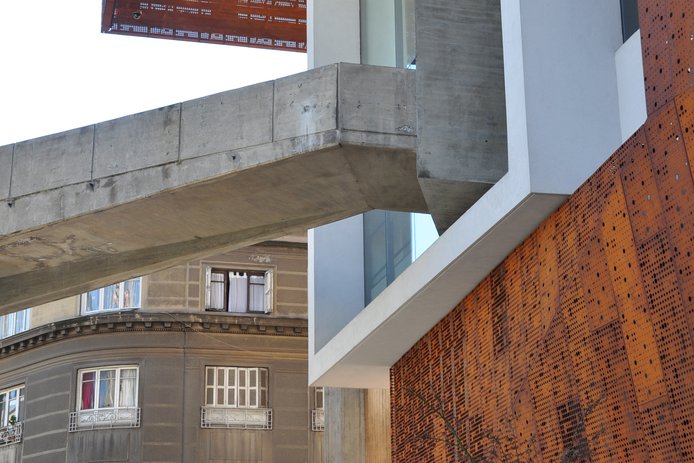 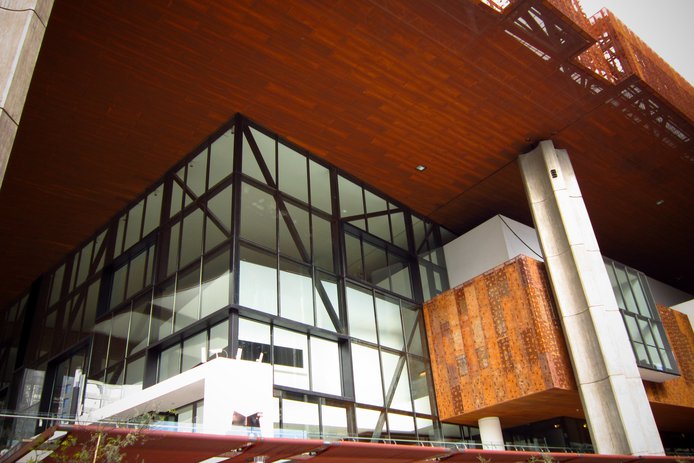 Architect Miguel Lawner, who coordinated the construction teams in 1972, was one of the protagonists of the renaissance of Center Gabriela Mistral in the 2010. More information on this matter can be accessed through his presentation on the Architecture and Memory seminar, conducted on September 5, 2010, in GAM.

Interviewing the architects behind GAM

This interview was done by journalist Gabriela García for GAM 10 years’ anniversary book.

After the fire that destroyed 40% of the building’s structure and caused the metallic roof to collapse on March 5, 2006, there was an international tender of architectonic ideas promoted by ex president Michelle Bachelet. The purpose was to give back to the citizens a building that has been created for the people before it was baptized by Augusto Pinochet as Diego Portales.

The bases even considered the possibility of a complete demolition and the creation of a whole new building, or the preservation of the structure and simply remodeling the building, says Fernández. But the project that triumphed over 55 proposals, presented together with Barahona and Yutronic, compromised on a middle ground: a building inspired by that memory but also one that could adapt to the demands of the 21st century.

The architects were extremely conscious of the building’s painful history because the three of them got their degrees in architecture in Universidad de Chile on Marcoleta Street. Fernández, the oldest, says that he used to visit the building with his father during the Unidad Popular government and that he remembered reading about the building in international magazines as referent of Latin American avant-garde. 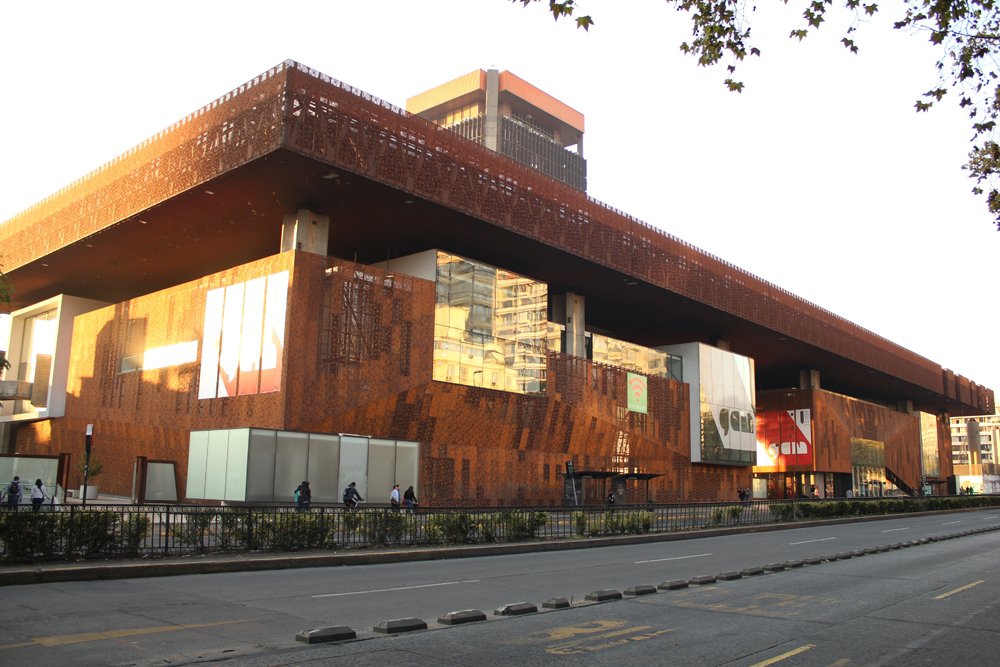 “It represented a polarized country: right wing people associated it with Allende and left wing people with Pinochet. Nobody actually loved the building”

The flames that started because of an electrical failure in the plenary hall on 2006, made everybody set their sights on the building. And, while some saw an excuse to tear it down, architects like Fernández, Barahona y Yutronic opted for the approach of signifying the building.

— “It was as if the fire let the air out from the symbolic tension the building had accumulated, as if figuratively the flames purified a place that was charged and tired of hiding so many calamities. It represented a polarized country: right wing people associated it with Allende and left wing people with Pinochet. Nobody actually loved the building”, says Fernández.

The attempt to transmute memory was not an easy one. But the architects were convinced that to design a 20,000 square meter space, able to shelter every citizen, they had to stop thinking of it as the Diego Portales building and immerse themselves in the values of the building erected by Salvador Allende’s government.

That’s why they asked to look around the whole thing, they even installed their office inside the building. Even though with the return of democracy and until the fire the place served as a convention center, and the Ministry of Defense was still working on the tower, nobody had dared to fully explore it.

— “I remember there was even a fully armed bunker in the parking area and we had to tear it down. Like in the movies it was filled with TV sets: it was the intelligence central. You couldn’t bring anything inside, it was crazy”, says Yutronic.

Despite the shivers they felt running through their spines as they walked the scene, they persisted. In a 2008 image that Yutronic keeps in his cellphone they are seen working on the design for GAM late into the night:

— This was on a Saturday around 1 AM. There were sleeping bags and coffee. We had a scooter to go to the bathroom and optimize time, we fed ourselves with square feet of pizza. I remember one night the National Guard was here and there was a soccer game in the casino. There was a lot of things going on here. It was very interesting”, says Barahona.

The team was made up by 25 people. Having conversations with some of the architects from the original project, like José Covacevic and Hugo Gaggiero, they had the opportunity of being permeated with the building’s genesis and receive the original plans from the very hands of its creators.

— They were members of the jury that chose us and they were very generous. They visited us several times together with Miguel Lawner. It was nice, because they made us feel comfortable and gave us material we didn’t have. Gaggiero, for example, brought the original plan for Bernal Ponce stained glass window, the kite filled with colors that was burned, and that we wanted to make again with the authorization of his widow for the main square”, says Yutronic.

While they were looking around the building and designing the new project, they were truly commissioners of a patrimony that was thought lost. Going through every corner that until that moment was off limits, they found some works of art thought lost since the 1973’s coup:

— "We were the first hired by the government to go through the whole building and make an inventory of what was in the cellars and underground facilities. There were some sinister places. You’d move one thing and behind would appear a tapestry, it was shocking. Just doing that we opened files on interesting elements, like Santos Chávez’s Taco and Ramón López’s lamps, the handles, the signals, which we saved before the demolition to be restored”, says Yutronic.

— “They were in a shocking state of abandonment, rotten, locked, hoarded behind plywood. The original plans didn’t manage to transmit what was going on in that place, because all of the building has been intervened by the army. The guard would keep their meals inside of a stature, as if it was a pantry. That was the level of neglect” —.

After coming and going to the past, they returned to their office to concentrate on their project. If something was clearer than ever it was that conceptually they wanted to keep their design as neutral as possible.

— “We didn’t want the building to be identified as a left wing or right wing building. We looked for a sort of equilibrium, to break with this dualist thing. The approach was super apolitical. One of the great things about the building is that it was always thought from the city and from the neighborhood, and not from itself or a political contingency”, explains Fernández.

Despite the original contract with the Ministry of Public Works was signed for only four months, they very quickly understood that the time they initially considered wasn’t going to be enough and they worked for a whole year inside the building.

— “As an architect one is accustomed to hear: ‘This is what we want’. But here we started with a program and as we were drawing, other ideas were being brought up. The fact is, GAM was born to be the solution for the great deficit Chile had in terms of cultural infrastructure. That’s the reason why they tried to fit everyboy in the building. We worked with more than 20 specialists, the technical challenge was enormous. Finally, it became a building for scenic arts, that’s its essence. It was a sort of homogenous thing whose identity was defined during the processes”.

“GAM is an institution that took a life of its own, a life that goes way beyond what we can imagine as architects”

Another task that took their time was deciding what to keep from the original building. That was until they decided t keep the pillars and build a new building coated with corten iron and repurpose the alerce wood from the original conference rooms.

To honor openness and transparency, besides, they multiplied the squares and threw down walls to generate connections with the Lastarria neighborhood and the Alameda. Through the fair, for example, people will be able to enter the Metro station from a pedestrian circuit.

— “It’s fundamental that the second stage, the 1,800 seats theater that’s been built, is completed so you can appreciate the urban dynamics and the potency of the project we designed. The idea was to inaugurate the first stage and in a few months start the second, but that second stage is still paused because of political and geological earthquakes”, says Fernández as he stares at the graffitied façade of the cultural center.

The architects pose for a picture. Behind their backs are the names of those who died during the social explosion that started on October 18, 2019.

— “It’s surprising what has happened. It’s weird to make a building for someone that doesn’t exist, but now, with the perspective of time, when you speak about GAM, one does know who that people is. Those who make their every day lives on its squares, those who dance in front of the mirrors, the cyclists and the artists. Through them the building found its identity. GAM is an institution that took a life of its own, a life that goes way beyond what we can imagine as architects. Look, we are at ground zero and we are still standing. The connection the building made with the people is very powerful. That is a joy for me as an architect. The building was transformed and today it’s loved, it let itself be, it flows. I believe that, not even in our most optimistic dreams, we though it would turn out like this”, says Fernández.